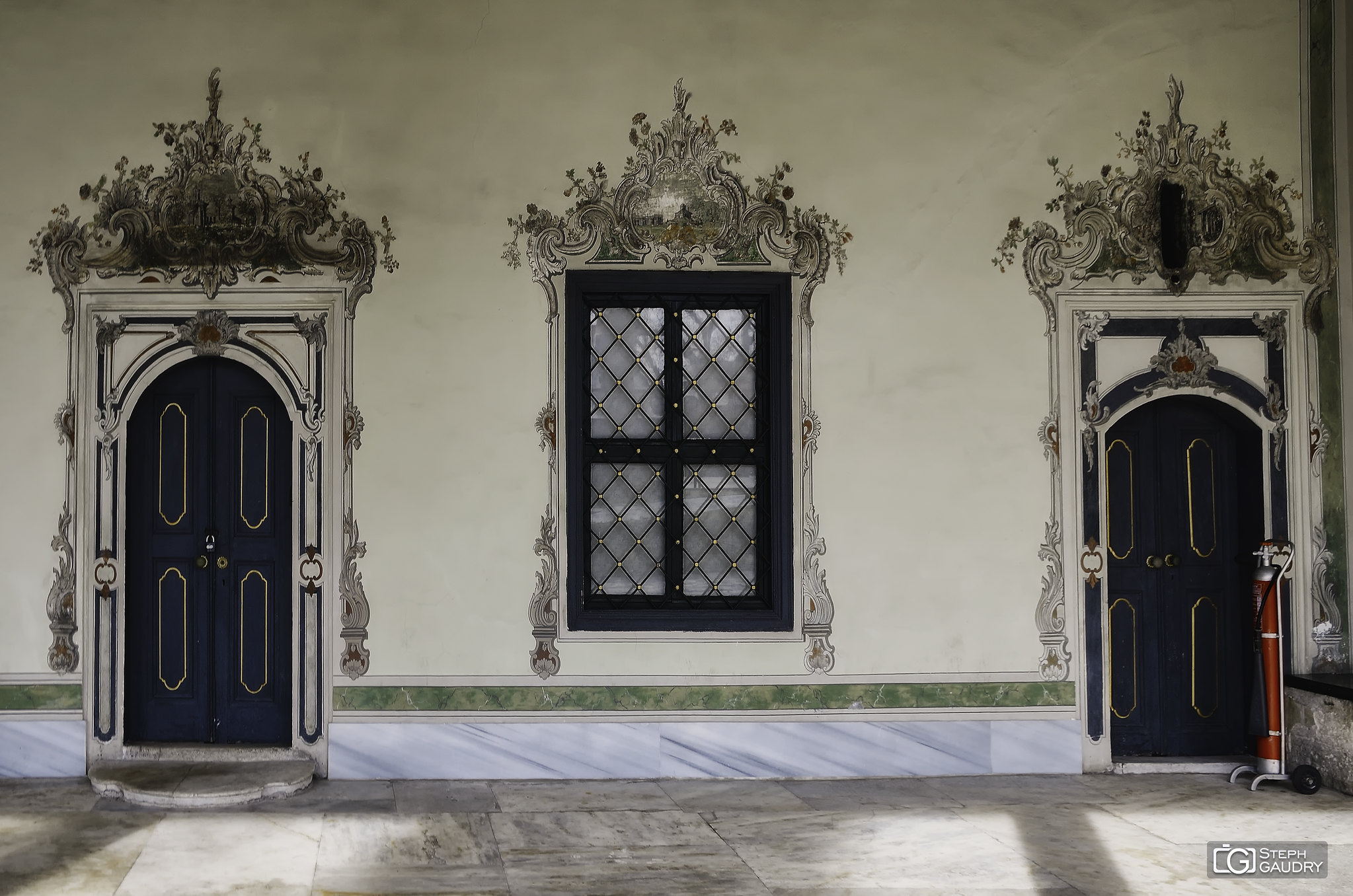 Imperial Council
The Imperial Council (Dîvân-ı Hümâyûn) building is the chamber in which the ministers of state, council ministers (Dîvân Heyeti), the Imperial Council, consisting of the Grand Vizier (Paşa Kapısı), viziers, and other leading officials of the Ottoman state, held meetings. It is also called Kubbealtı, which means "under the dome", in reference to the dome in the council main hall. It is situated in the northwestern corner of the courtyard next to the Gate of Felicity.

The first Council chambers in the palace were built during the reign of Mehmed II, and the present building dates from the period of Süleyman the Magnificent by the chief architect Alseddin. It has since undergone several changes, was much damaged and restored after the Harem fire of 1665, and according to the entrance inscription it was also restored during the periods of Selim III and Mahmud II.

From the 18th century onwards, the place began to lose its original importance, as state administration was gradually transferred to the Sublime Porte (Bâb-ı Âli) of the Grand Viziers. The last meeting of the Council in the palace chambers was held on Wednesday, August 30, 1876, when the cabinet (Vükela Heyeti) met to discuss the state of Murat V, who had been indisposed for some time.

The council hall has multiple entrances both from inside the palace and from the courtyard. The porch consists of multiple marble and porphyry pillars, with an ornate green and white-coloured wooden ceiling decorated with gold. The floor is covered in marble. The entrances into the hall from outside are in the rococo style, with gilded grills to admit natural light. While the pillars are earlier Ottoman style, the wall paintings and decorations are from the later rococo period. Inside, the Imperial Council building consists of three adjoining main rooms. Two of the three domed chambers of this building open into the porch and the courtyard. The Divanhane, built with a wooden portico at the corner of the Divan Court (Divan Meydani) in the 15th century, was later used as the mosque of the council but was removed in 1916. There are three domed chambers:

- The first chamber where the Imperial Council held its deliberations is the Kubbealtı.
- The second chamber was occupied by the secretarial staff of the Imperial Divan.
- In the adjacent third chamber called Defterhāne (this view) , records were kept by the head clerks. The last room also served as a document archive.

On its facade are verse inscriptions, which mention the restoration work carried out in 1792 and 1819, namely under Sultan Selim III and Mahmud II. The rococo decorations on the façade and inside the Imperial Council date from this period. The main chamber Kubbealtı is, however, decorated with Ottoman Kütahya tiles. Three long sofas along the sides were the seats for the officials, with a small hearth in the middle. The small gilded ball that hangs from the ceiling represents the earth. It is placed in front of the sultan's window and symbolizes him dispensing justice to the world, as well as keeping the powers of his viziers in check.

Council members such as the Grand Vizier, viziers, chief military officials of the Muslim Judiciary (Kazaskers) of Rumelia and Anatolia, the Minister of Finance or heads of the Treasury (defterdar), the Minister of Foreign Affairs (Reis-ül-Küttab) and sometimes the Grand Müfti (Sheikh ül-İslam) met here to discuss and decide the affairs of state. Other officials who were allowed were the Nişancilar secretaries of the Imperial Council and keepers of the royal monogram (tuğra) and the officials charged with the duty of writing official memoranda (Tezkereciler), and the clerks recording the resolutions.

From the window with the golden grill, the Sultan or the Valide Sultan was able to follow deliberations of the council without being noticed. The window could be reached from the imperial quarters in the adjacent Tower of Justice (Adalet Kulesi). When the sultan rapped on the grill or drew the red curtain, the Council session was terminated, and the viziers were summoned one by one to the Audience Hall (Arz Odası) to present their reports to the sultan.

All the statesmen, apart from the Grand Vizier, performed their dawn prayers in the Hagia Sophia and entered the Imperial Gate according to their rank, passing through the Gate of Salutation and into the divan chamber, where they would wait for the arrival of the Grand Vizier. The Grand Vizier performed his prayers at home, and was accompanied to the palace by his own attendants. On his arrival there, he was given a ceremonial welcome, and before proceeding to the imperial divan, he would approach the Gate of Felicity and salute it as if paying his respects to the gate of the sultan's house. He entered the chamber and took his seat directly under the sultan's window and council commenced. Affairs of the state were generally discussed until noon, when the members of the Council dined in the chambers and after which petitions were heard here. All the members of Ottoman society, men and women of all creeds, were granted a hearing. An important ceremony was held to mark the first Imperial Council of each new Grand Vizier, and also to mark his presentation with the Imperial Seal (Mühr-ü Hümayûn). The most important ceremony took place every three months during the handing out of salaries (ulûfe) to the Janissaries. The reception of foreign dignitaries was normally arranged for the same day, creating an occasion to reflect the wealth and might of the state. Ambassadors were then received by the Grand Vizier in the Council chambers, where a banquet was held in their honour.

istanbul palai palais topkapi turquie
Paramètres de langue du site
Si vous préférez continuer sur le site en français, cliquez sur "Annuler". Si vous annulez, ce message n'apparaîtra plus durant la session.
You are on the French version of the site, but your system indicates that you prefer to use the English language.
The entire site is not translated yet, but the menus and buttons on the interface are largely translated.